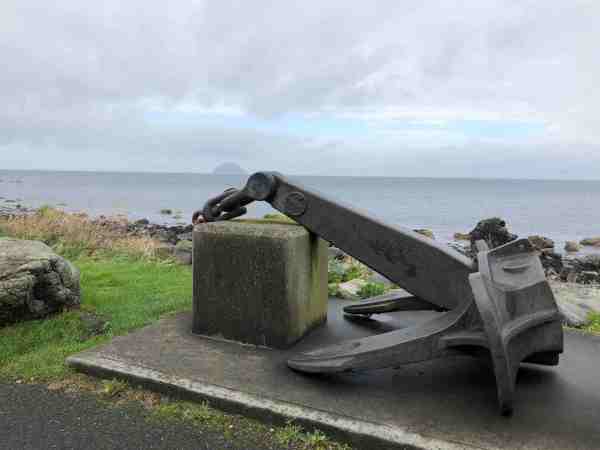 The road from Culzean continues close to the coast and unusually is a relatively fast one. We tried to visit Maidens for the beach but the only parking had a height barrier so we continued on, passing quickly through Turnberry, one of Trump’s resorts and as garish and ugly as you would imagine. Girvan was in contrast earthy and rather run down but we did manage a beach stop there.

At Lendalfoot we stopped to explore the monument to the Russian ship Varyag, a ship with a complex and chequered history. She was launched in 1899 and was assigned to the Russian Navy but was sunk by her crew rather than surrender to the Japanese in 1904. Later raised by the Japanese, she was renamed Soya and served with the Japanese Navy before being sold back to the Russians to serve in WW1. The Russian revolution put paid to that and she ended up in the Royal Navy but she ran aground near Lendalfoot.

From there we continued to Stranraer and onto the Rhins of Galloway, the most south-westerly peninsular in Scotland. Exploring this peninsular was fascinating. It is very agricultural with mainly beef cattle and many small roads that went literally nowhere! It was also where we were introduced to the concept of single track roads with no passing places – I was glad we weren’t visiting in peak season!

Portpatrick on the far west coast was a pretty harbour with a lighthouse but the highlight was the Mull of Galloway, the most southerly point in Scotland, also known as Scotland’s Lands End.

It was late afternoon by the time we reached there and the winds were picking up, adding to the bleak beauty of the place. Steep cliffs and fabulous views over Cumbria, Ireland and the Isle of Man on a good day. The lighthouse stands dramatically on the cliff top. It is also an RSPB centre with colonies of guillemots, razorbills and kittiwakes, though they had all gone to warmer places by the time we visited.

We were ushered into the centre though by a very sweet and enthusiastic volunteer called Douggie who made a big fuss of Otter and Martha, chatted about the place and our trip and, eventually, rather tentatively, asked if I’d ever considered joining the RSPB. I had and I did, happily. After all, I am undertaking a trip with a fairly big carbon footprint so supporting an organisation committed to protecting the environment was the least I could do. And, as Douggie pointed out, I would be passing through many RSPB reserves on my travels!

Once duly signed up, we left and went back to the van, intending to stay over at the Mull. The sunset was beautiful and I was looking forward to be up there at dawn. But by 10.30pm the winds were so strong that the van was rocking and being so exposed felt quite scary, so we headed down the hill to another, slightly more sheltered park up at Port Logan for the rest if the night! 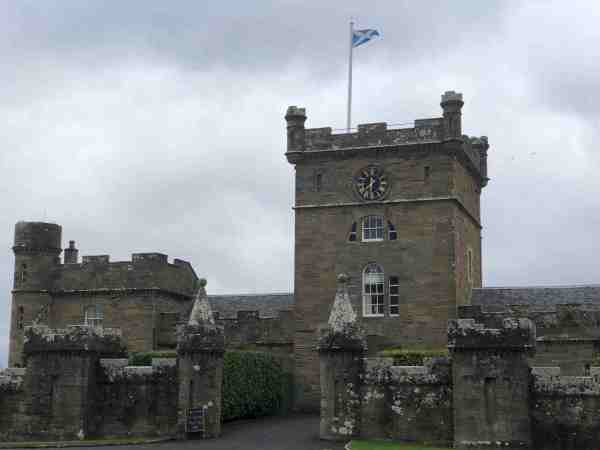 We woke on Ayr campsite after a wet night to find Wolfie surrounded by a moat! Not impressed with the drainage here – and not the friendliest of sites – so was glad I had only booked one night and was moving on to Culzean (pronounced without the ‘z’) today.

Janet arrived mid morning and we drove in convoy the short run down the coast to Culzean Castle, the impressive 18th century castle perched on the cliffs overlooking the Firth of Clyde. It is now owned by the National Trust of Scotland and both house and grounds are open to the public.

We arrived to find a promotional event for cycling so we got some free gifts as well – I got a whistle and Janet a very small microfibre towel! I think I got the better deal. We managed to convince them that the combination of bikes and dogs would not end well and that we had come to walk. First we explored the castle ramparts and environs, then we headed off to the beach.

The beach is reached down a very steep bank of steps which were very slippy after the rain. At the bottom is a lovely holiday cottage but I wouldn’t fancy carrying luggage down there. By the beach there is also the old gas house, which supplied power to the castle until the 1940s.

After a romp on the beach where Saffy and Otter tried to play and Martha tried to stop them, we continued for a rather wet walk along the disused railway line and around the wider grounds. Dogs all walked we had a lovely late lunch in the cafe then walked some more before heading back to the lovely Culzean campsite in the grounds to enjoy the views out to sea over a brew. All in all a lovely day in good company. 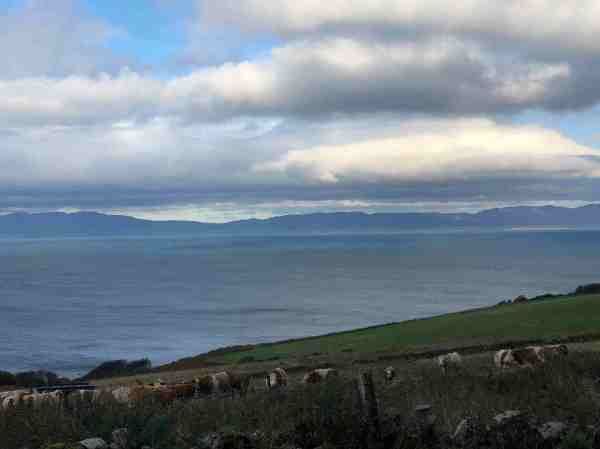 The overriding association of these few days is frustration. I was up against the clock because we had booked the van into a KwikFit Plus in Glasgow to have the brakes done. I checked with them that they could handle a vehicle the size of Wolfie and gave our registration number so they could check it themselves. They assured me they could so we were duly checked in for the Saturday morning. A friend, Joan, volunteered to come and collect me and the dogs and take me for coffee while they did the work so all was arranged. But the down side was that I had a time pressure to get down to Glasgow.

My aim on the Friday was to get near Loch Lomond so that I only had a short drive into Glasgow on the Saturday morning. But this meant a lot of driving from Crinan if I was to take in any of the coast – and a disappointing but unavoidable decision to miss out the Cowal peninsula and Dunoon – at least for now.

We set off early from Crinan determined to make it around Knapdale and Kintyre at least. It was a dull and windy day and, being up against the clock, we missed stopping in a lot of places that we would otherwise have explored. But we had great views across to Islay and Jura on the west coast.

Our visit to Kintyre was worth it for Westport beach alone – a stunning, sandy beach with crazily wild waves.

We reached Tarbet just in time to get excellent fish and chips from the shop on the harbour and then continued round to Inveraray and on over Rest and Be Thankful to finally reach our park up at Balloch on the edge of Lomond. It was a gruelling day of driving – over 200 miles – not something I would want to repeat. But through some amazing countryside.

On the Saturday morning we headed down to Glasgow to drop off the van and meet Joan, only to be told by the mechanic at Kwikfit “We don’t do those” as he nodded towards Wolfie. When I protested that I had explained what she was and given them the registration so they could check, he just shrugged and repeated “We don’t do those”, as if if he said it often enough it would be less annoying!

So frustrating! I had raced down here for this – missing out a chunk of coastline in the process – only to be turned away. But there was little to be done. At that moment I decided that the brakes would have to wait. I was going home in mid-October for some blood tests so I could have them done at our local garage. At least they could be trusted to do the job!

Joan and I headed off to a local Starbucks for a welcome coffee and catch up before we said our goodbyes and I set off to the coast once more, rejoining the coast at the Erskine Bridge. This part of the coast is industrial, with a rich ship building heritage and commercial and naval docks, as well as the more genteel marinas with their yachts and small craft. Port Glasgow. Greenock. Gounock.

It was very wet but we stopped at Inverkip for a brief walk on the shore then headed on. This part of the coast has a road right along it – fairly rare I have found. And sadly for us, we got so far and found this one was closed between Skelmorie and Largs!

The diversion was ridiculous taking us all the way back to Port Glasgow, then across country. We attempted to find our own way via Garvock but found that road closed as well. So we had no choice but to go all the way back then via Lochwinnoch to Largs. From there we had no more problems – apart from the terrible weather making any chance of seeing anything slim!

We finally reached Ayr and the campsite we had booked after another long and frustrating day. But we had arranged to meet Janet and the Maremmas the next day at Culzean so hopefully things would look up.

My apologies for the radio silence over the past few weeks. I am still alive and the trip is still going well, though I am currently recovering from a bout of something nasty in the stomach department (recuperating at Tilley Farm which is hugely restorative).

I haven’t been posting as I was finding that it was taking all my time in the evenings. Not just the writing which is quick but sorting through and editing photos and getting them in the right format, editing video etc. So we would drive, walk, visit places, then stop for the night and I would be doing stuff for the blog/Youtube every evening. It was becoming like a job and adding to the pressure which this trip is meant to be addressing.

So I decided to take a break from it. I am still posting regularly on Facebook (so send me a friend request if you are not seeing those) plus I am keeping notes – so the trip reports will come eventually. I am just not pressuring myself to keep up to date.

Pressuring myself is something I do very well. I realise that this whole trip is actually a symptom of it. I could have just said I am taking 4 months off to travel and then gone where I wanted and stayed as long as I liked. But no – I said I was going round the whole coast – and I built in stops for workshops etc. so round the whole coast I have to go – and under time pressure.

Except I don’t. I have to keep reminding myself that there are no rules except those I have set myself – and I have the prerogative to change those. I can miss out bits of coast if I like and I can stay longer in some bits than others. This is in fact inevitable but I am not somehow ‘cheating’ if I do it.

So for the rest of the trip I am taking my time where I want and speeding up when I want. I have two more workshops planned up in Yorkshire at the beginning of December but I have long realised that I would not be up there in time so will take a week out to go from wherever I am to do those then home for the rest of the week for the dreaded election. I will then go back and continue my travels.

It is all good learning. About myself and what drives me. About the pressures I put upon myself. About priorities and what is important. I hope you will understand.